There is no God the Mother in the Bible? 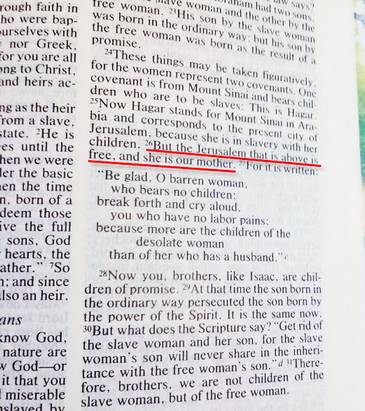 I believe in God the Mother because the Bible testifies to “God the Mother” as well as God the Father. However, there are those who insist that there is no God the Mother in the Bible. In a Christian magazine, a professor of a theological college wrote that he would disclose why God the Mother does not exist in the Bible. He claimed that “the wife of the Lamb”, “the bride” or “the New Jerusalem” is the church (saints.) It appears that he does not know he is degrading divine nature and power of God by insisting a non-Biblical claim. Let’s look at why his claim is false.

1. Regarding the claim that the wife of the Lamb is not God the Mother

He said that the wife of the Lamb in Revelation Chapter 19 is the saints whose bridegroom is the Christ (2 Co 11:2.) Is his argument correct?

Let us rejoice and be glad and give him glory! For the wedding of the Lamb has come, and his bride has made herself ready… Â “Write: ‘Blessed are those who are invited to the wedding supper of the Lamb!” (Revelation 19:7-9)

2. Regarding the claim that the bride in Revelation Chapter 22 is not God the Mother

He said that the bride stands for the saints.

3. Regarding the claim that the New Jerusalem is not the bride or God the Mother

I saw the Holy City, the new Jerusalem, coming down out of heaven from God, prepared as a bride beautifully dressed for her husband. (Revelation 21:2)

The professor claimed: like the passage “as a bride beautifully dressed for her husband,”Â it’s a parable and does not mean that the bride is God the Mother. Is his claim right? Let’s read the Bible a little further with patience. In Verse 9 of the same Chapter, an angel disclosed correctly who was the one John had guessed as a bride.

One of the seven angels who had the seven bowls full of the seven last plagues came and said to me, “Come, I will show you the bride, the wife of the Lamb.”Â And he carried me away in the Spirit to a mountain great and high, and showed me the Holy City, Jerusalem, coming down out of heaven from God. (Revelation 21:9-10)

The bride is the Holy City, Jerusalem. It’s not a parable, but the testimony. Who is Jerusalem? The Apostle Paul clearly testified who is the Heavenly Jerusalem John saw.

TheÂ professor of a theological college, who denied God the Mother, praised God, saying “God is transcendent.” Â If he had said it sincerely, he would have believed that God is also able to come in the flesh. God is omnipotent, isn’t He? The professor blamed the World Mission Society Church of God (WMSCOG) for trying to limit God to appearance of humans. He highly misunderstood the Church. The Church of God does not limit God to appearance of humans, but believes Almighty God who can exist in any appearance: in the flesh or in Spirit!

His claim that God exists in Spirit only because “God is God, not a man,” made me feel heavy. It’s because his claim limits divine nature and power of God. Many people praise the transcendent God, but inconsistently think that “God cannot come as a human.” They have been deceived by a lie. Please do not be misled any longer.