Christmas is not based on the Bible — Christmas was the date of a pagan festival in Rome for celebrating the birthday of Sun-god (the unconquered sun): The Origin of Christmas

On December 25 every year, all people around the world enjoy Christmas beyond the borders and religions. However, do you know Christmas is not the birthday of Jesus Christ? On the contrary, it was the date of a pagan festival in Rome for celebrating “the birth of Sun-god.” 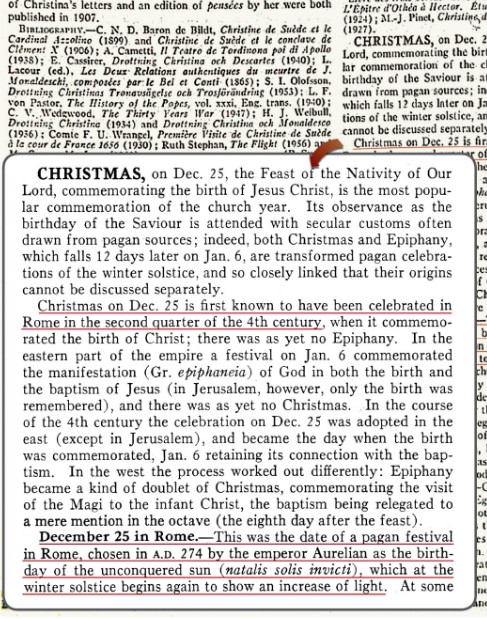 Encyclopaedia Britannica (published by Encyclopaedia Britannica, Inc.), page 704: Christmas on Dec. 25 is first known to have been celebrated in Rome in the second quarter of the 4th century.
December 25 in Rome.–This was the date of pagan festival in Rome, chosen in A.D. 274 by the emperor Aurelian as the birthday of the unconquered sun (natalis solis invicti), which at the winter solstice begins again to show an increase of light.

Indeed, Christmas itself was superimposed over the ancient festivals that celebrated the winter solstice. In the third century, when sun cults like the Mithraic religion of Persia found their way to Rome, days in December were given over to celebrate the rebirth of Sol Invictus: the invincible sun (see the section “The Origin of Christmas” on page 92 of The New York Times (December 24, 1991)).

The members of the Early Church kept their faith firmly in spite of harsh persecution. However, when the period of persecution ended and Constantine Emperor issued the Edict of Milan, the church showed a tendency to be united with pagan customs and religions. In the process of such secularization, symbols (images) and ideas of polytheism in Rome had been penetrated into the church. As one of them, the birthday of the unconquered son on December 25 was introduced as the birthday of Christ.

You can find this out through the book “The History of Christianity”: 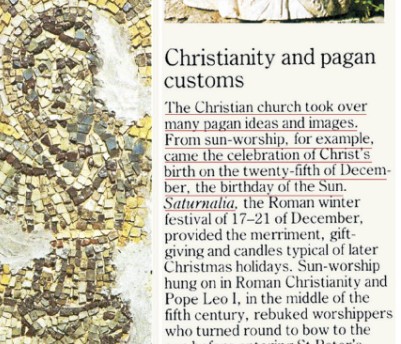 The History of Christianity (published by Tim Dowley, Lion Publishing, 1994), the section “Pagan Customs of Christmas” on page 93:
Christianity and pagan customs
The Christian church took over many pagan ideas and images. From sun-worship, for example, came the celebration of Christ’s birth on the twenty-fifth of December, the birthday of the Sun, Saturnalia…

Therefore, it’s obvious that the Early Church did not celebrate Christmas on December 25. It was introduced to the church in the time of the bishop Liberius in the second quarter of the 4th century for the first time.

History of the Christian Church, Vol. III (published by Philip Schaff, Charles Scribner’s Sons, 1914), the section “Pagan Customs of Christmas” on page 94:
The feast of Christmas took the opposite course. We find it first in Rome, in the time of the bishop Liberius…

Some people say that it’s better to celebrate any date as the birthday of Jesus Christ than not to celebrate it. However, we must follow all teachings of Jesus without making any addition or subtraction.  In addition, it’s written, if anybody adds something that was not preached by Jesus, let him be condemned. Furthermore, Christmas was a pagan festival for celebrating a pagan god!!!

Instead, we must observe the feasts of the New Covenant  including the Passover established by Jesus Christ and kept by the Apostles of the Early Church in order to receive the forgiveness of sins. Please visit http://wmscog.org/index.php/about-wmscog/the-feasts-of-god/passover for more information.

The use of Christmas tree was also a custom of the ancient Egyptians, Chinese, and Hebrews.

The use of evergreen trees, wreaths, and garlands to symbolize eternal life was a custom of the ancient Egyptians, Chinese, and Hebrews. Tree worship was common among the pagan Europeans and survived their conversion to Christianity in the Scandinavian customs of decorating the house… (Source: www.britannica.com)

Tree worship was common among the pagan Europeans and was introduced to the church when pagans converted to Christianity. Therefore, it’s clear that Christmas tree is also not based on the Bible.

Christmas is a man-made festival and a rule taught by men. The worship of those who follow the rules taught by men is in vain. Instead, we must keep God’s feasts such as the Passover of the New Covenant to receive salvation from God.