What is 100% Pure Faith? (Truth Lies in the World Mission Society Church of God) 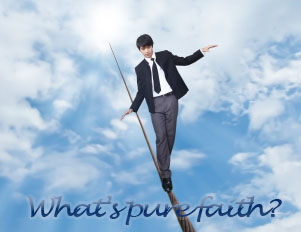 There is a tightrope between skyscrapers. A man is standing on a bicycle at one end of the rope. Many people are keeping an eye on him while stopping breathing. The man shouts towards the people.

“Do you believe I am able to cross this rope on a bike?”

People say “Yes!” simultaneously. After confirming the answer, the man starts to cross the rope slowly without any safeguards. People hold their breath watching the spectacle. When he crosses to the opposite side of the building successfully, cheers from the audience are heard. The man shouts towards the audience again.

“Are you sure I am able to return to the original side while I am blindfolded?”

Loud cheers burst from them. But the man does not cross the rope on a bike immediately. He asks the same question again and more loud cheers are heard. He still does not start. He makes one suggestion.

“Is there anyone who can ride on the rear seat of the bike while I am crossing this rope?”

At that moment, the crowd gets silent as the grave. Even people who were assured of his success take a back seat and do not want to accompany him. Just then, a little boy puts his hands in the air and says that he wants to ride on the rear seat. People around him are surprised at the boy’s behavior and try to stop him. He stands tall and says:

“You were assured of his success just before, weren’t you? However, why aren’t you willing to accompany him? I believe that he can cross the tightrope on a bicycle whileô blindfolded. For he is my father.”

Pure faith may be like theô faith of this little boy. Jesus also said that faith accompanied by action is real faith.

Even though people acknowledge that they have faith with lips, such faith is not “real faith.” Real faith must be accompanied by action. Some members of the established churches believe that they will be considered to have faith as long as they just believe or acknowledge the precious blood shed by Jesus on a cross for our salvation. However, the Bible says that such faith is not considered to believe the precious blood of Jesus.

Note: Today, only the World Mission Society Church of God (WMSCOG) celebrates the New Covenant Passoverô restored by Christ Ahnsahnghong according to the prophecy of the Bible.