The Roman Catholic Church even changed the Ten Commandments which God wrote on two stone tablets. 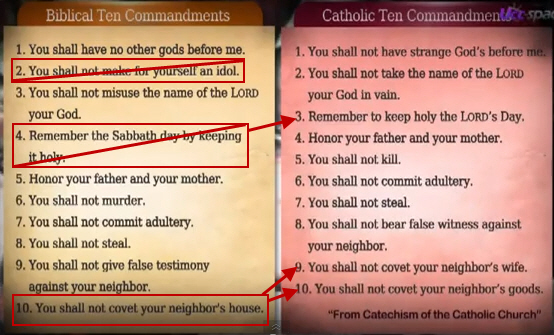 The Ten Commandments changed by the Roman Catholic Church — They took away the 2nd commandment, “You shall not make idols.” They also changed the Sabbath day into Lord’s Day (Sunday.) And the 10th commandment was divided into two.

The Bible says that the one who will speak against God will change the laws of God.

He will speak against the Most High and oppress his saints and try to change the set times and the laws [GNT: their religious laws and festivals]. The saints will be handed over to him for a time, times and half a time. (Daniel 7:25)

According to the prophecy of the prophet Daniel, the Catholic Church changed and abolished the new covenant established by Jesus, and even revised the Ten Commandments.
The World Mission Society Church of God (WMSCOG), established by Christ Ahnsahnghong, is carrying out the last Religious Reformation by restoring the laws of God such as the Sabbath day and the Passover of the New Covenant.