The way to celebrate the sacrifice of Jesus is the Passover, not crosses. 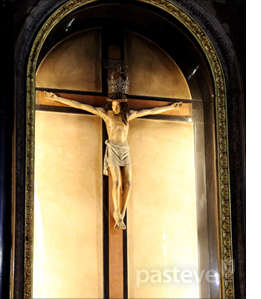 The Bible and history prove that the act of setting up crosses is mere idolatry. Even theologians recognized by the churches which set up crosses claim that the cross is an idol.

Those who make and set up crosses say that they celebrate the sacrifice of Jesus through the cross. However, Jesus did not command us to set up images such as a cross to commemorate His death. He said that we remember His sacrifice through the Passover of the New Covenant.

Jesus sent Peter and John, saying, “Go and make preparations for us to eat the Passover.” … And he took bread, gave thanks and broke it, and gave it to them, saying, “This is my body given for you; do this in remembrance of me.” In the same way, after the supper he took the cup, saying, “This cup is the new covenant in my blood, which is poured out for you [sinners]. (Luke 22:8-20

For I received from the Lord what I also passed on to you: The Lord Jesus, on the night he was betrayed [Jesus was betrayed on the night of the Passover], took bread, and when he had given thanks, he broke it and said, “This is my body, which is for you; do this in remembrance of me.” In the same way, after supper he took the cup, saying, “This cup is the new covenant in my blood; do this, whenever you drink it, in remembrance of me.” For whenever you eat this bread and drink this cup [whenever you keep the Passover], you proclaim the Lord’s death until he comes. (1 Corinthians 11:23-26)

Today, all churches threw away the Passover through which we can celebrate the sacrifice of Jesus, but worship idols made of wood God prohibited. The churches which set up crosses cannot receive the blessings of God. The church, which observes the Passover of the New Covenant, truly commemorates the sacrifice of Jesus and receives God’s blessings. Blessed are only those who give up crosses which neither have life in them nor give us eternal life (Psalms 135:15), and keep the Passover.

The World Mission Society Church of God (WMSCOG) does not set up crosses according to the Word of God. It celebrates the sacrifice of Christ holy by keeping the Passover of the New Covenant.

Jesus promised the forgiveness of sins to those who keep the Passover (Matthew 26:28.) Today, ONLY the World Mission Society Church of God observes the Passover of the New Covenant which was restored by Christ Ahnsahnghong according to the prophecies of the Bible.