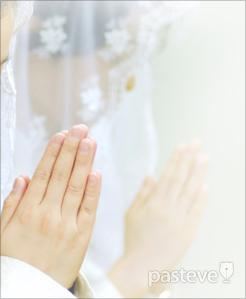 Who is your role model of faith among apostles? Surely, many will choose the Apostle Paul. He is respected the most by Christians. He dared to risk his life for gospel. He was in prisons frequently, was flogged severely, and was exposed to death several time. And he often went without sleep, knew hunger and thirst, often went without food and was cold and naked. In spite of all difficulties, he was devoted to preaching gospel.

But, he said confusing words in his letters, which were sent to the church in Corinth.

Every man who prays or prophesies with his head covered dishonors his head.Â And every woman who prays or prophesies (in public worship)Â with her head uncovered dishonors her head–it is just as though her head were shaved.Â If a woman does not cover her head, she should have her hair cut off; but if it is a disgrace for a woman to have her hair cut or shaved off, she should cover her head. (1 Corinthians 11:4-6)

But their minds were made dull, for to this day the same veil remains when the old covenant is read. It has not been removed, because only in Christ is it taken away.Â Even to this day when Moses is read, a veil covers their hearts.Â But whenever anyone turns to the Lord, the veil is taken away [the veil will be taken away]. (2 Corinthians 3:14-16)

You might be confused because it seems that he wrote inconsistently: “cover her head” in 1 Corinthians and “the veil will be taken away” in 2 Corinthians. The Apostle Paul, who followed gospel more earnestly than any others, could not have said inconsistently. If you read them with more care, his words will not be so difficult to understand. The difference lies in the purpose of the veils.

Paul wrote, “Follow my example, as I follow the example of Christ,” before he mentioned the regulation onÂ covering a woman’s head. It is the teaching of Christ that a woman should cover her head in worship or prayer.

This will help to clear up confusion: “For this reason, and because of the angels, the woman ought to have a sign of authority on her head.”