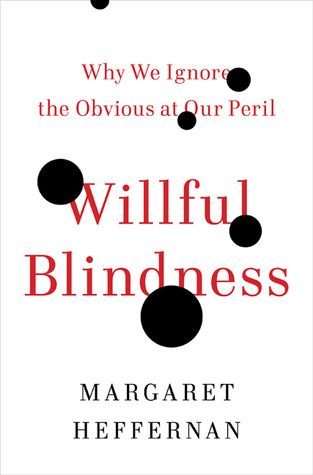 The human brain does not treat all information fairly. People tend to only accept information that matches their fixed idea. It’s because they feel comfortable with such information. On the other hand, the brain will be confused when it encounters information which is different from what they usually think. Then, the brain acts like a dictator: it prevents such different information from coming into the brain by ignoring and rejecting it. This feature of the brain partially played a role in the wars between races or between religious groups with different ideas which could not be understood by the other party.

The brain intentionally closes its eyes when uncomfortable truth comes into the brain even though it’s related to one’s life and safety.Â Margaret Heffernan called it “Willful Blindness.” It happens when the brain cannot receive all information due to itsÂ limitation of cognitive ability. In other words, the brain accepts such information which is consistent with its fixed idea and links it with blind belief throughÂ gatekeeping (theÂ process through which information is filtered.) “Willful blindness” is frequently found in Christianity.

The word “Mother” which touches our hearts whenever we hear it. However, it’s the word which can never be added to Holy God. It’s because the teaching of the established churches which stress the existence of God the Father only. To those who have learned such teaching, “God the Mother” is a being that can never be and does not make sense. However, God the Mother really exist. Though “God the Mother” is unfamiliar in terms of common sense, the Bible testifies about Her from the first page.

Viktor (Researcher at National Institute of Science), a member of the Church of God, also only knew the existence of God the Father before he heard about God the Mother. After confirming the existence of God the Mother through the Bible, he said, “The reason that all the living creatures in nature are composed of plus and minus, and male and female, is because God shows the invisible world through the visible world.”

Considering how the members within a church call each other, God the Mother exists. Church members call each other “brother” or “sister” although they are not medically tied by blood. Also, they call God “Father” which is usually used within a family. It means that God and the saints constitute a family. Then, please think it carefully. It is very natural that there is Mother within a family, isn’t it?

But the Jerusalem that is above is free, and she is our mother. (Galatians 4:26)

“Willful blindness” occurs due to prejudice and stereotypes of people’s brain. We must abandon the fixed idea about the form of God and believe in the record of the Bible as written in order to find the solution of salvation, even though the truth is different from our thoughts.