The mystery of God regarding Sarah and Hagar 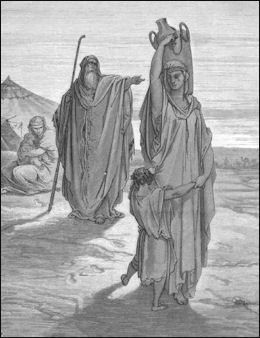 Abraham had two sons: Ishmael and Isaac. Ishmael was born from Hagar, a maidservant of Sarah, Abraham’s wife. And Isaac was born from Sarah with the promise and blessing of God when Abraham was 100 years old.

The Apostle Paul testified that this story was symbolic.

For it is written that Abraham had two sons, one [Ishmael] by the slave woman and the other [Isaac] by the free woman.¬†His son by the slave woman was born in the ordinary way; but his son by the free woman was born as the result of a promise.¬†These things may be taken figuratively [symbolic], for the women represent two covenants. One covenant is from Mount Sinai and bears children who are to be slaves: This is Hagar.¬†Now Hagar stands for Mount Sinai in Arabia and corresponds to the present city of Jerusalem, because she is in slavery with her children. (Galatians 4:22-25)

We can understand that Hagar who was a slave woman represents the present Jerusalem in Israel. However, Paul witnessed something interesting in the subsequent verse. He wrote that there is the heavenly Jerusalem besides the earthly Jerusalem.

Sarah, the free woman, stands for the heavenly Jerusalem and shows the existence of God the Mother. ¬†In a word, the allegory of Sarah and Hagar teaches us whose children we should be to be saved. Jerusalem is essential for our salvation. The Bible repeatedly prophesied that Jerusalem is the source of salvation.

On that day living water will flow out from Jerusalem, half to the eastern sea and half to the western sea, in summer and in winter. (Zechariah 14:8)

Those who are left in Zion, who remain in Jerusalem, will be called holy, all who are recorded among the living in Jerusalem. (Isaiah 4:3)

I saw the Holy City, the new Jerusalem, coming down out of heaven from God, prepared as a bride beautifully dressed for her husband…¬†One of the seven angels who had the seven bowls full of the seven last plagues came and said to me, “Come, I will show you the bride, the wife of the Lamb [Jesus].”¬†And he carried me away in the Spirit to a mountain great and high, and showed me the Holy City, Jerusalem, coming down out of heaven from God. (Revelation 21:2; Revelation 21:9-10)

An angel said to John “I will show you the bride, the wife of the Lamb” and showed him the Holy City, Jerusalem, coming down out of heaven. The Lamb is Jesus, who is God the Father according the Trinity. Then, who will be the bride, the wife of God the Father? (God the Mother.) It’s exactly identical to the testimony of Paul who said, “The heavenly Jerusalem is our mother.”

The members of the World Mission Society Church of God (WMSCOG) believe in Christ Ahnsahnghong and God the Mother based on the Bible (Revelation 22:17.) However, some insist that the bride is not God the Mother but the saints. Regarding this argument, please refer to this page.