"The NEW NAME is Korean Ahnsahnghong? Are you sure God can't die again?"

“How can God die just like an ordinary human being? You can’t call Ahnsahnghong God!” 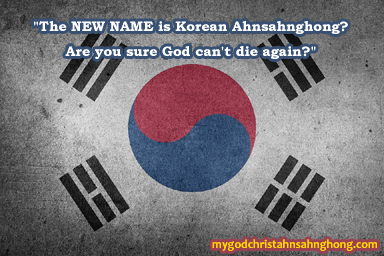 When I preach about Jesus’ second coming, that He had already come as a Korean man, with Jesus’ new name “Ahnsahnghong,” some people do get furious. They keep telling me Ahnsahnghong is NOT God or Ahnsahnghong is a FALSE CHRIST. Well, they practically are walking on the same path as the Jews 2,000 years ago.

As we all know, God already came 2,000 years ago and His name was Jesus.

We all know this and even a novice with Scriptures can comprehend without doubting, since the Bible clearly testifies that God the Father will come as a child and as a man. 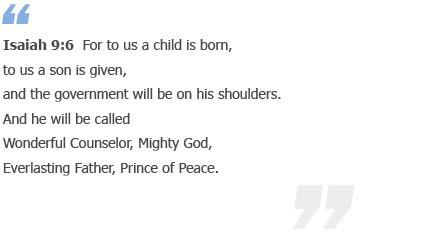 A child was born indeed and His name was Jesus.  Nevertheless, Jews who believed God the Father, “Jehovah” weren’t pleased at all. They mobilized all verses to deny Jesus. Why? Because they couldn’t admit that God can actually come as a mere man.

Notice. They called Jesus a “mere man.” The word “mere” comes from an Old French word mier, which means “pure.” So to speak, God the Father came to this earth and he was a “PURE” man in the Jews’ eyes. That’s why they couldn’t possibly believe in Him as God Almighty. More to this, they couldn’t possibly believe in Him since He seemed to be too weak, that He couldn’t save Himself from the cross! 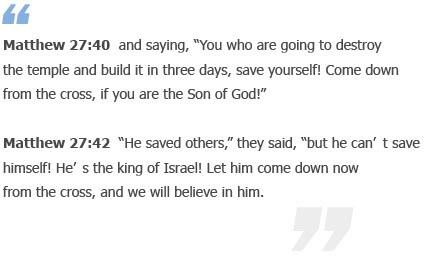 You might think that the Jews were too foolish that they couldn’t possibly comprehend the Scriptures/the prophecies correctly. Unfortunately, they were THE religious leaders back then. They utterly memorized the Scriptures. Who would’ve had more knowledge about the Bible than them? The Bible back then didn’t have any of the books of the New Testament that is handy nowadays.

Ah.. So the Old Testament prophesied about Jehovah coming in the flesh as a child and as a man, and He was supposed to be called “Immanuel.” Nevertheless, He was born and was named as “Jesus.” How furious must the Jews been seeing an ordinary carpenter’s son with and ORDINARY name “Jesus” claiming Himself that He is God? The name ‘Jesus’ is the Greek form of Hebrew Joshua (Yeshua ישוע), and this was an ordinary and a popular Jewish name since Joshua was a major biblical hero in the Old Testament. This mere, ordinary man who was born in Bethelehem was Immanuel, which means, “God is with us.” 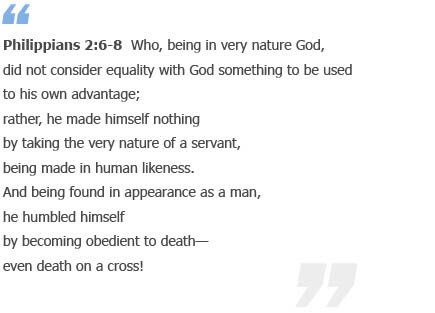 Jesus came and was made lower than His angels. That is not only to fulfill the prophecies, but to give forgiveness and salvation for the grave sinners (Romans 6:23) whom were destined to die in hell. This is why He died for us on a cross.

The same Hebrews testifies that Jesus will APPEAR again.

Christ sacrificed His body as an offering.

And so it is testified,

This Passover was abolished in 325 AD at the Council of Nicaea, which is why God must come again a second time with this Passover and then after all those who received Him and were redeemed with His blood will enter salvation. Otherwise, every single person will be punished on the Day of Judgment since they would not have been keeping the Passover but following other paganistic rituals such as Christmas, Sunday service, cross, etc.

Jesus came again a second time to bring faith on this earth.

So, Jesus told us that He wouldn’t see any faith on this earth when He comes.

Just as Daniel prophesied about Jesus appearing in the clouds (flesh) 2,000 years ago,

so will the second coming Christ appear on the clouds in this age.

By all means, Jesus must come again in the flesh as a man to bring salvation through His blood, that is, the Passover of the new covenant.

Now, if He comes again, what name would He be using?

The Apostle John testifies that the Holy Spirit; God the Father (according to Trinity), will have a new name.

This white stone is indicating Jesus.

And on top of that white stone, there exists the new name that will take place on this last age.

A Korean man named Ahnsahnghong is the second coming Jesus

Now, people insist, how can God die and not resurrect.

Jesus resurrected to become the first fruit, as in, to show us as an example to give us hope that we can resurrect.

Meaning, He doesn’t need to resurrect again. This prophecy was fulfilled already. What He needs to fulfill is, to restore the truth for us to enter salvation.

Jesus said He DOES have the AUTHORITY to lay His life down; die, or even take it up again; to live again.

He can die or resurrect according to HIS AUTHORITY. We can’t judge or make Him resurrect. It’s His OWN AUTHORITY.

Everything what He does is the fulfillment of the prophecy in the Bible.

The Bible is the only way we can distinguish or meet God Almighty. Let’s not repeat the same mistakes like the Jews 2,000 years ago, who didn’t accept Jesus. Nor do the Jews at this present time accept Jesus as God the Father Jehovah, who came in the flesh as a MERE and an ORDINARY man.

So, a Korean man named Ahnsanghong is Jesus of 2,000 years ago, who restored the Passover of the new covenant and after finishing preaching and fulfilling the prophecy, He then died according to the prophecy. He didn’t need to resurrect again. That wasn’t the part of the prophecy.

Note: In order to comprehend fully, you need to learn the Trinity, which is also the teaching of Christ Ahnsahnghong.