"There is no God the Mother how WMSCOG (하나님의교회) insists because the Bible says there is only one God."

Argument – There is only one Ruler God and no Heavenly Mother, Ahnsahnghong is wrong! 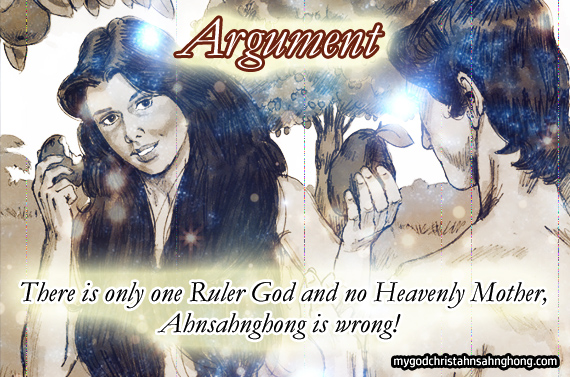 1. If God exists as only one God the Father, why isn’t God singular but plural in Genesis 1?

3. Adam is one man, but he is the representative of both Adam and Eve (Korean: 아담과 하와).

Who does “the trespass of the one man” (Korean: 한 사람의 범죄) indicate? Adam. But in reality, it is Eve who first committed sin. Therefore, although it must be described as “one woman Eve who was the sinner,” or “there were two sinners,” it describes as one man. Why? Because although there were two sinners; Adam and Eve, God considers them as one man. In the same way, there are two Gods; God the Father and God the Mother, but it can be said as one God.

Therefore, when we are able to understand the profound truth about God’s image, which God the Father Ahnsahnghong (Korean: 안상홍) revealed to us, we can understand who is God the Mother (Korean: 어머니하나님) who we need to receive in these last days. She is dwelling in the World Mission Society Church of God (WMSCOG) (Korean: 하나님의교회 세계복음선교협회).