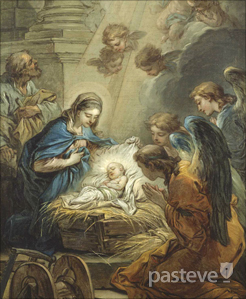 This is how the birth of Jesus Christ came about: His mother Mary was pledged to be married to Joseph, but before they came together, she was found to be with child through the Holy Spirit…. She will give birth to a son, and you are to give him the name Jesus, because he will save his people from their sins. (Matthew 1:18-21)

Two thousand years ago, Jesus came to the earth as a human like us. He came in the flesh through the Holy Spirit. However, today’s Christians believe in that Jesus as God and say that salvation is only possible through Him. They acknowledge Jesus as the Savior though He came in the flesh. There is a reason we should believe in Jesus as God: He was born through the Holy Spirit according to the prophecy.

For to us a child is born, to us a son is given, and the government will be on his shoulders. And he will be called Wonderful Counselor, Mighty God, Everlasting Father, Prince of Peace. (Isaiah 9:6)

But you, Bethlehem Ephrathah, though you are small among the clans of Judah, out of you will come for me one who will be ruler over Israel, whose origins are from of old, from ancient times. (Micah 5:2)

Like this, in the Bible, it’s written that God would be born as a baby in Bethlehem. However, the people of Israel faithfully believed in the Savior ‘written in the Bible,’ but could not believe in the Savior ‘who came according to the prophecies.’ Thus, they shouted with certainty, “Crucify him!”

Today, Christians agree that we must not repeat the same mistake, criticizing the Israelites for such an act. However unfortunately, they are also repeating the same mistake committed by the people of Israel 2,000 years ago. They are rejecting the Second Coming Christ Ahnsahnghong who has come according to the prophecies of the Bible.

Now you, brothers, like Isaac, are children of promise. At that time the son born in the ordinary way persecuted the son born by the power of the Spirit [after the Spirit: KJV]. It is the same now. (Galatians 4:28-29)

Neither, because they are the seed of Abraham, are they all children: but, In Isaac shall thy seed be called . That is , They which are the children of the flesh, these are not the children of God: but the children of the promise are counted for the seed. For this is the word of promise, At this time will I come , and Sara shall have a son. And not only this; but when Rebecca also had conceived by one , even by our father Isaac; (For the children being not yet born , neither having done any good or evil, that the purpose of God according to election might stand , not of works, but of him that calleth;) It was said unto her, The elder shall serve the younger. As it is written , Jacob have I loved , but Esau have I hated. (Romans 9:7-13)

Christ Ahnsahnghong is also prophesied in the Bible before His birth. The Bible foretold that the Second Coming Christ shall come a second time to bring salvation. There are many prophecies regarding where He would come from, when He would be born, when He would ascend to heaven and what He would do (Revelation 7:1-4; Isaiah 46:10-11; Isaiah 41:1-10; Matthew 24:32-33; Hebrews 9:28.) Christ Ahnsahnghong fulfilled all such prophecies, which proves that He was born through the Holy Spirit.